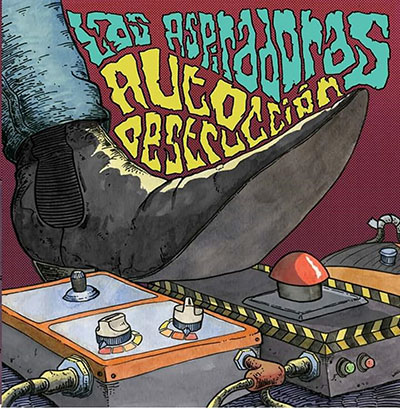 The brand-new single by Spanish garagepunk-sensation LAS ASPIRADORAS once again puts 60s garagepunk in a nutshell. As soon as you see the coverdesign displaying a merseyboot and fuzzpedal, you can pretty much guess whats inside. The band from Toledo has changed their line-up more than once, but at all times remained faithful to their hard 60s garagepunk with a lot of fuzzguitar, organ and screaming Spanish vocals a la WAU Y LOS ARRRGHS!!!. ‘Autodestruccion’ takes that exact same line – even the catchy title song grabs you with its spooky organ while the musical punkrock-party is guaranteed at the latest by the second song ‘A La Gresca’! No need to be able to speak Spanish in order to catch oneself singing and dancing along. Primitive, wild garagepunk at its very best! The b-side starts off with the catchy song ‘Oso Hormiguero’ and finally there is also a brilliant coverversion of the 60s garage-classic ‘Open Up Your Door’ (originally from RICHARD & THE YOUNG LIONS) to be found on this 7′. The coverversion not only has Spanish lyrics (‘Abre La Cleva’) but also the usual wild Spanish punkattitude – fuzzguitar times ten, a dominant farfisa organ and screaming vocals! Fantastically primitive, fuzz- and organdriven garagpunk with a wild, Spanish party atmosphere – what more can you possibly want!?

A great single by Spanish garagepunk-sensations LAS ASPIRADORAS. As soon as you see the cover design displaying a merseyboot and fuzz pedal, you can pretty much guess what’s inside. The band from Toledo has changed its line-up more than once, but at always remains faithful to that hard ’60s style with fuzzed out guitars aplenty, organs and screaming Spanish vocals à la WAU Y LOS ARRRGHS!!!.

SIDE A:
1. Autodestrucción
2. A La Gresca