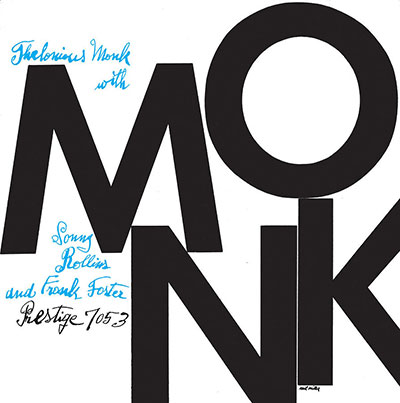 Artwork by ANDY WARHOL 1954 It’s truly astonishing how much Thelonious Monk can do with so little. Working with an all-star ensemble including Sonny Rollins and Art Blakey, Monk will settle into a small section of the melody laid out in the opening of the song, playing endlessly with rhythmic variations and possibilities for dissonance.

These explorations never become self-indulgent, but rather create new spaces within the songs that his band can explore.

The album begins with We See, using the unusual rhythms that are Monk’s trademark. High notes played by the horn section serve as punctuation on the song’s main melodic theme.

Monk plays a relaxed solo, and Frank Foster continues the laid back tone. Ray Copeland changes the dynamic with spiraling flurries of notes.

Smoke Gets In Your Eyes, the second track, is the album’s best. Monk plays a sweetly mournful intro, and the horn section plays in beautiful unison in support.

Monk follows with a more wistful solo. The mood of the song is tightly controlled, and its spell is maintained throughout the entire track.

The quintet kicks up the energy next with Locomotive. The tension in the song builds until about the :50 mark, with the horns moving steadily up in the mix.

Copeland has a wonderful solo, interacting excitedly with Blakey on drums. Foster also has a superb solo, which in this excellent remaster sounds like he’s playing in a far off place all by himself.

Next up is Hackensack, the name of the city where producer Rudy Van Gelder’s studio was during the recording of the album.

It has the most dynamic intro of any song on the album, and features another great solo by Foster that sounds like it being played from the back of the room.

Think Of One (Take 2), the sixth track, and the better of the two versions of this song included on the album, sounds the most like a live recording of any track.

Julius Watkins on the French horn has a gorgeous solo, matching wonderfully the muted tone of the Sonny Rollins solo which precedes it.

On the album Monk plays with 2 different quintets, and brings the same level of quality from each.

The musicians are encouraged to explore different aspects of the given melodies and rhythms, or to radically change the dynamic of a song.

The rest of the band always follows suite with the new direction, and Van Gelder’s excellent production captures every exhilarating moment.